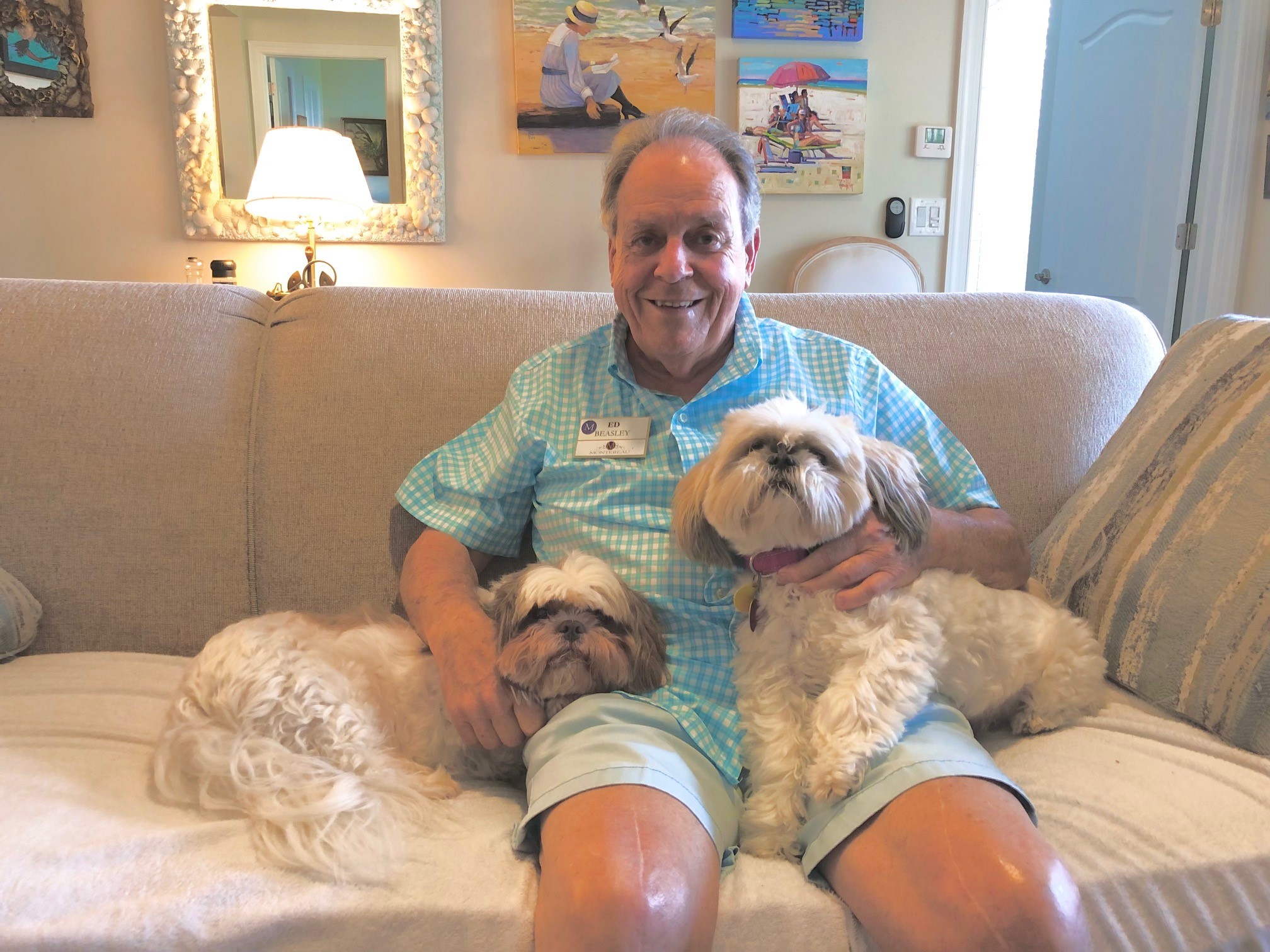 Ed Beasley moved to Montereau just over a year ago and immediately plugged himself into the community. For those who know him, he is usually smiling which, interestingly, is a trait he learned later in life.

A self-described solemn kid, he grew up in Madill, Oklahoma. He was a pretty typical boy who came from a loving family, but didn’t smile much of the time. It wasn’t until his mid-forties that he found his smile, and he has been smiling ever since. In fact, if you pass him on campus and make eye-contact, chances are, he will be smiling at you, too!

He enjoyed growing up in Madill, where he developed a love of adventure! He recalled a story from his high school days when he and three friends decided to road trip during the summer between his junior and senior years of high school – he was 17 years old at the time – and all piled into his friend’s 1954 Ford. They each put $50 in a kitty for expenses and set out! Their first stop was Dumas, Texas, where they learned about a rancher who was hiring help to harvest wheat. They stayed and worked for him on his ranch for ten days to earn travel money and learned a lot in the process! Their trip took them to several notable places including Colorado (Pikes Peak and Boulder); the Grand Tetons; Yellowstone and Glacier National Parks; Alberta, Canada; San Francisco; the Redwood Forest and the Grand Canyon. The whole trip lasted seven weeks! And when they got back, they split up the money that was left and all got $25 back! Ed jokes that his seven-week trip only cost $25! Admittedly, he inherited his love of travel and sense of adventure from his mother.

Ed married his high school sweetheart, Kay, when he was in college and she was going into her senior year of high school. She was seventeen years old at the time, and they decided to elope! Once Ed graduated from college, they moved to Colorado where Ed taught Technical and Industrial Arts, Family Living and Sex Education. While teaching, he earned his master’s degree and went on to become a school guidance counselor at the junior high level.

He and Kay eventually moved back to Madill, and he took a job as the Assistant Director of the Ardmore Higher Education Center. That job led to his becoming the Director and CEO of the center before retiring at the age of 54.

His 32-year career in education has been followed by 26 years (and counting) of retirement! Upon retiring, he and his wife moved to Lake Texoma. They had a small two- bedroom cabin for a number of years before building their dream home on the property. They enjoyed many wonderful memories with their kids and grandkids at the cabin! Ed recalls teaching all of his grandkids to drive using his golf cart as practice! One of his joys was sailing the small islands in his two-person sailboat, which he kept on the lake.

Ed and Kay enjoyed 47 wonderful years of marriage before she passed away. After some time, he was lucky enough to meet another wonderful woman, Mary Ann, who became his life partner. Together, they moved to Galveston, Texas. However, after her death and some coaxing from his daughter, he decided to move closer to family in Tulsa and made the move to Montereau! He has continued to volunteer his time on numerous boards including the Marshall Country Hospital Foundation and the Madill Alumni Education Foundation. At Montereau, he has joined the Activities Committee, and he volunteered to facilitate Life Story writing classes for Montereau residents this fall.

Ed’s life philosophy is one he adopted at a young age, and he has kept it top-of-mind throughout his life. He says taking risks has enriched his life tremendously! And he is still trying new experiences! In fact, every month he chooses one new activity on our calendar and attends to expand his horizons. Although he doesn’t always enjoy every new thing he tries, he emphasizes the importance of trying new things. “Stepping out of my comfort zone has made my life fuller,” he says. We’re sure glad Ed took a chance on Montereau!