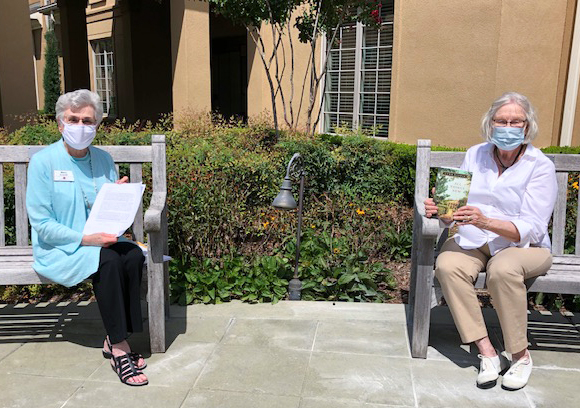 According to the Merriam-Webster Dictionary, the definition of a Pen Pal is a friend made and kept through correspondence. Its first known use was in 1925, and it grew in popularity at various times over the years. Now sending letters and cards through the mail is referred to as “snail mail” because it is significantly slower than sending an email or text. But how nice it is to receive a piece of “snail mail” from friends or family!

During quarantine, Montereau established a resident pen pal program as a way to stay connected. Once the program was introduced, several residents signed up to take part – and among them were Mary Everett and Carol Vaughn. Both were enticed by the opportunity to reach out to another person and get to know them the old-fashioned way.

Over weeks and months of being socially-isolated and socially-distant, they formed a nice bond through their letters and cards. Mary sent the first letter, which was hand-written. The letter-writing process, however, quickly evolved technologically as they began using their computers to type out their greetings. Their letters were always printed out and hand-signed, and most times, they were hand-delivered to the other person’s door! Carol noted that she was always careful to leave the letter and not knock on the door. What a fun surprise! Carol and Mary’s letter-writing continued for months – with a letter every exchange seven to ten days.

Both Carol and Mary share a mutual excitement about the entire process of being a pen pal – from sitting down to write or type a letter, to finding out through questions and comments more about the other person, to receiving a letter from the other loaded with more tidbits providing insight into their lives, families and hobbies. Carol noted, “I have enjoyed Mary’s letters tremendously. I always made it a point to sit down with coffee or tea while reading each letter.” At one point, Carol found out that Mary is an avid reader and asked for suggestions on book titles. Based on Mary’s written suggestions, Carol has started the book, Everything’s Changed by Jane Austin, which she is thoroughly enjoying.

Mary also values the power of the written word as a medium to reach another person in a meaningful way. She shared that, years ago, she had a secret pal at church who placed a short, yet inspirational, note in her church mailbox every week for a year. She looked forward to retrieving the note from her mailbox every Sunday. It wasn’t until the end of that year that it was revealed who had sent the notes. Even after meeting in person, she maintained a solid connection with that individual that was based on those many notes left during the course of the year. Mary has enjoyed the “two-way” communication from this process and has felt it to be beneficial getting to know another resident in such a unique way.

Mary takes comfort in the fact that other residents are all around the same age and have been through life in a similar timeline. “If you know where someone is coming from, you know how to relate to them.”

Mary and Carol never met while they exchanged letters this year. Just recently, they were finally able to sit down together and visit in person when we gathered to take a photograph to accompany this story. They both were delighted to finally meet face-to-face and seemed to hit it off immediately as they recalled their shared connections! Even after meeting, they agreed to continue sending cards and letters for the remainder of the Covid pandemic, and both look forward to building on their pen-pal friendship! ■